During my trip to Mongolia, we set out to do a week-long Gobi desert tour, during these you typically stay with different nomadic families each night. If you read my post about what the tour looked like, you’ll find this one speaks to it quite a bit. You see, traditional Mongolian nomadic life is so rich and I realize the least I can do is warrant it a post of its own. Alas, here we are.

Just some gers on the steppe. Typical… 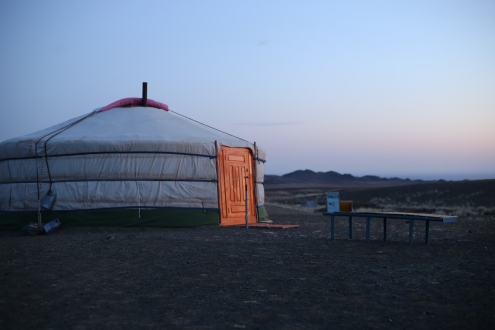 Traditionally, Mongolian nomads own two homes (the gers) one for the summer and one for the winter. Naturally, these are in two different parts of the desert. The ger is also used in other countries bordering Mongolia. In Kazakhstan, they’re known as yurts, but are essentially the same thing: round wooden structures dressed with thick cloth to provide a home. Get this: the structure is 100% wood, making it lighter to carry on a camel back when switching locations. BUT in the spirit of modernity, many families use pickup vans rather than camels to move them.

The gers we visited all had very simliar style. In true Mongolian hospitality, each family had at least two gers: one for the family/cooking and one for guests. Most even had three gers that allowed them to separate the ger where the family slept from the cooking space altogether. When entering the teeny tiny entrance (if this doesn’t make you feel like you suddenly turned into Alice in Wonderland I don’t know what will), the first thing you’ll notice is the stove taking up the center space in the room. This is used for both cooking and eating and is “powered” by… guess what? Camel doodoo! 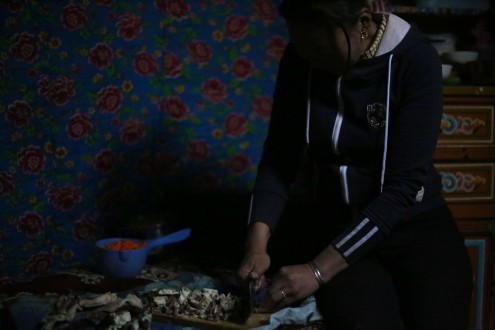 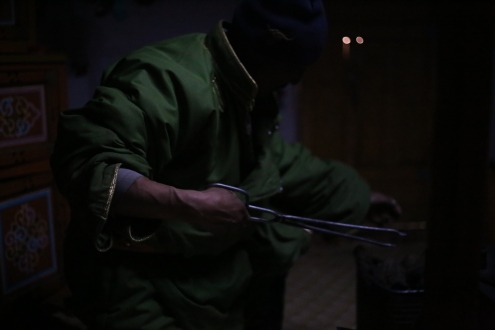 Putting more doodoo in the stove

The space is comfortably furnished with bureaus that all had the same style pattern: hand painted flowers in bright colors. The other thing they all included were family pictures… oh, and a satellite TV and phone! 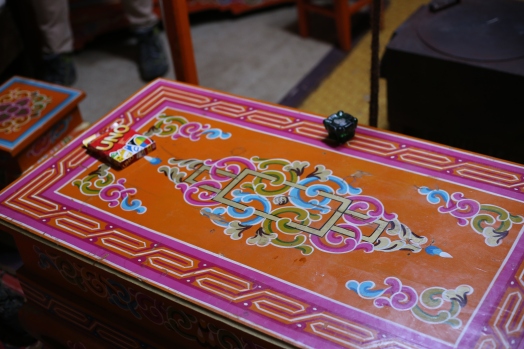 Porcelain dolls as far as the eye can see

Family pictures in traditional dress could be found in every home

Me chillaxing in the guest ger

Gers are telling of Mongolians’ superstitions. For instance, there are two supporting beams in each ger and it is considered bad luck for the family if anyone stands or walks in between the two. The poles represent the husband and wife of the family, and getting in between them is predicative of a divorce.

I was surprised to find that the Mongolian family unit is quite small. Usually just the husband, wife and one child live in the ger. And since the gers are out in the middle of the desert, the closest (closest here is highly relative) town may not have a school. What happens then is that many families send their children to relatives living in Ulaanbaatar. Though, the family unit isn’t the biggest the sense of community among neighbors is and people will often gather together for the occasional meal or swing of the vodka bottle. I guess living out in the middle of nowhere must bring you that much closer.

Neighbors getting together for some tea

The family we stayed with!

The children help out herding teh sheep, not the same as back home

There was not one family we visited who didn’t have animals. Most have goats by the hundreds, a few camels and some horses, dogs and cats. At the center of it all is the camel, making ger life all the more self-sustaining. Apart from using them for transportation, the wool for clothing, Mongolians milk the camels to create treats like dehydrated butter with raisin, milk curd and warm salty milk tea (which you will be offered at least twice per day while there. But it doesn’t stop there. No, amigo. The camel doodoo is also used for the stone oven for both heating and cooking. Pretty nifty!

The stone stove takes up the middle of the room and is used as both a centralized heating system and cooking device. When visiting a ger, you’ll notice how tea-and-snack-centric this culture is. More than likely, you will be offered a cup of milk tea along with some fried biscuits before your behind even touches the couch. Rarely do people drink water I realized. Hydration usually comes from either tea, milk tea, or airag (fermented horse milk). Oh, and then there is also the occasional swing of the vodka bottle but mind you, once the bottle is opened, it needs to be finished.

Typical: biscuits and curdle made from camel milk

The mama of the household cooking dinner

And for the main course? Homemade dumplings!

The dough (flour and water) is carefully kneaded out 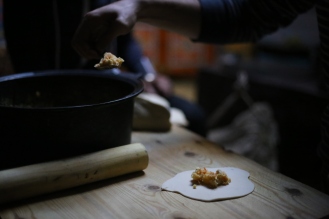 And last, fried in the open stove. Yum!

I was surprised to find just how welcoming everyone was despite that fact that we were only visiting for the day and not able to communicate with the families (hence the beauty in having a guide since my Mongolian is much worse than rusty).

Our host family and I 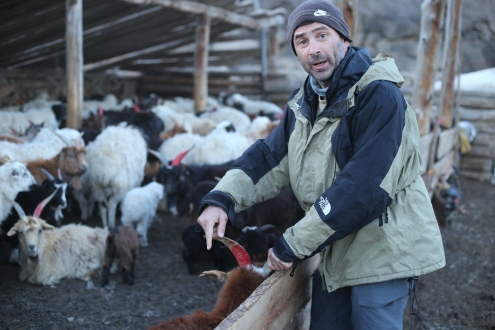 My dad giving a helping hand to a nursing goat

There is much to learn for us Westerners in experiencing a more (in our heads) “simple way of living”. We’re so quick to judge other cultures based on what we have and they don’t. Because a country doesn’t have access to running water coming out of a tap, they’re deemed “underdeveloped”. And we don’t stop at the judging, no, we are so set in our way of living thinking that this must be the “correct” way that we feel we can inflict this on other people by going in and doing community developmental projects, forcing new systems of thought and of political structure upon them never taking a step back and realizing that we just might not know the answer. Oh and by the way, this is not speaking directly from Mongolia – just my little stream of consciousness coming to light. So that leads me to my big question: is there and should there be such a thing as a sovereign state?

“Cool story, bro. But how much did it cost?”

Check out this post for more information about going on a Gobi tour!